A final bumpy bus drive takes us over a rocky road to the small
town of Akshu. While Sam and I try hard not to vomit, Kivik peacefully
dozes of while the bus almost gets shaken to pieces.

10 yaks to bring 600kg food and gear up to basecamp

The morning after everything gets loaded onto yaks – not much to their
approval. After the necessary hustling around a grand parade of ten yaks
with drivers, our two cooks, the liaison officer and the three of us
head out into the mountains. To our astonishment the yaks refuse to set foot on snow or glaciers and we find out our base camp is quite the hike from our target mountain, Barnaj I. We decide to already drop some gear off, across the glacier, in an advanced base camp.

our basecamp on the last green spot go the valley. The north face of Hagshu in the background

Although I was aware my body hadn’t adapted to the 4400m altitude yet, I felt
strangely distant, floaty and dreamy on that hike. Could the thin mountain air make me feel like I had been hitting the bong too hard? A second acclimatization trip on the hill behind our camp turned out to be trippy again and I started wondering if my feeling high was just caused by our being high up a mountain. A closer look at the expiry date of  the pills Sam had given me for my lasting diarrhea quickly shone a new light on the case. Six year expired antibiotics apparently count as mild hallucinogenics… 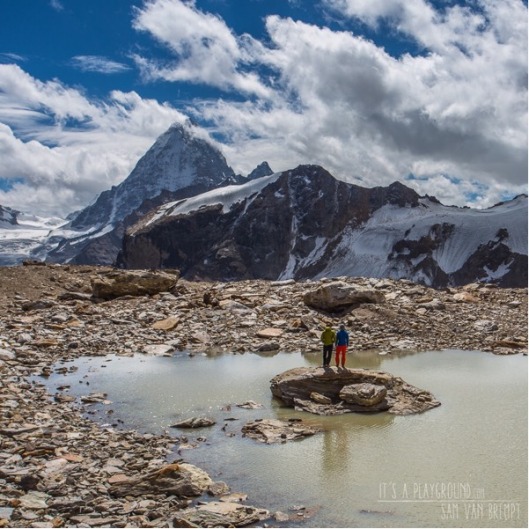 An acclimatisation journey to 5200 meters. Hagshu north face in the background.

Unfortunately the mountains have provided us with a serious ammount of gray skies and subsequently we were confined  to our tents for two days while snow puked from the firmament.

Basecamp after 4 days of bad weather

Bored and lazy we were excited to see blue skies and decided to hike up to a
peak we assume to be Laggan (5800m), where we would attempt the summit
ridge the next day. 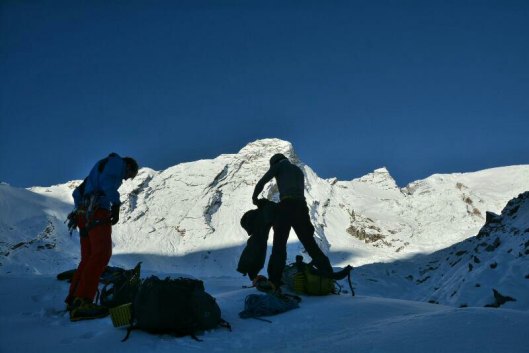 Sam and Nelson preparing for Lagan 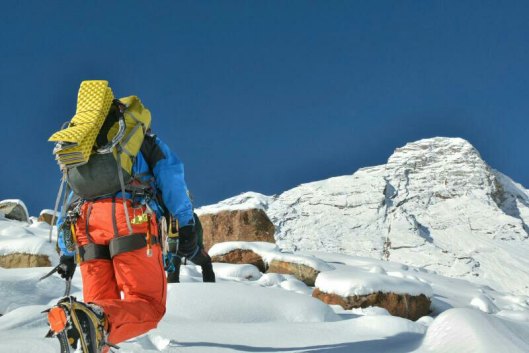 Sam on the approach to Mt Lagan. We intended to climb the lefthand ridge (c)Kivik Francois 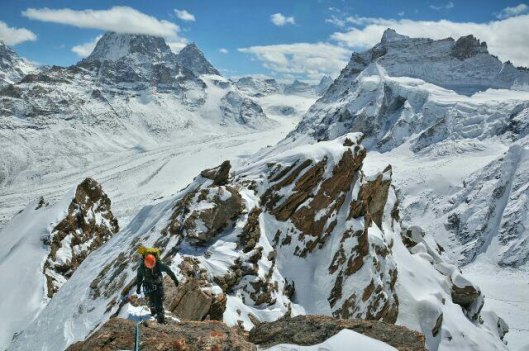 In hindsight, one sunny day is – by far – not enough to solidify half a meter of snow at 5000m. A day of plowing  through knee deep snow at that altitude got us up to the ridge too late and, pretty exhausted, we decided to spend the night on a little saddle to climb the arete the next day.

Despite some clouds rolling  in, Kivik was excited -‘bien chaud’- for his first real bivouac under the stars. When somewhat later those clouds started dropping small but, unmistakable, snowflakes on us, Sam got worried about wet sleeping bags and mentioned going down. As Kivik was still ‘bien chaud’ and I was tucked in tight and couldn’t be bothered leaving my down paradise, we stayed.

Kivik, Sam and Nelson at their ivy (c) Kivik Francois

We were promised blue skies, the morning sun hid behind a dark cloud. Altough our sleeping bags were covered in snow and Kivik’s watch had shown minus 17 at night, we were quite warm and rested. I realized my butt was freezing cold, but that was because snow had melted between my mattress and sleeping bag and I had – effectively – been sleeping in a puddle of water. We left Laggan for what it was and
headed back to BC to dry our stuff.

After some cloudy days we headed out for a trip to a supposedly unclimbed peak, for some more of the good old acclimatization. Sadly, even though we were on a south facing slope, we were held back by unsolid powder snow again. This time our bivouac was not ‘bien chaud’ and the little sleep combined with deep snow slowed us down considerably. 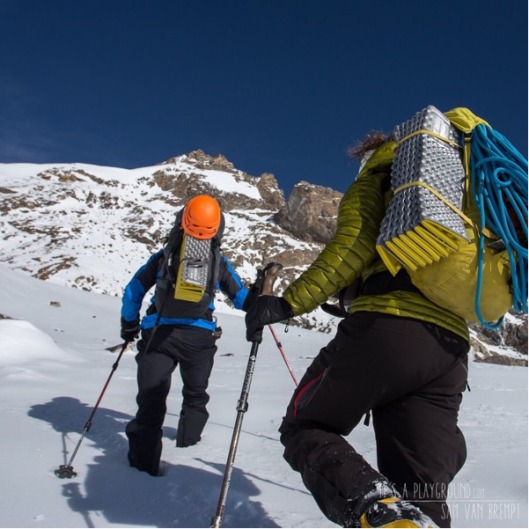 On the approach for an unknown summit

At the base of the 100m rock that separated us from the summit we decided we didn’t have enough margin to cut it to the top. It was getting late, with the winds picking up clouds came bothering us again, and quite frankly, I was falling asleep where I
was standing.

The last ridge to our unknown summit

Now we’re acclimatized and aching to climb some real mountains we are awaiting some days without afternoon clouds rolling in. Hopefully the Kistwar Himalaya did not save their 50 days ofbad weather a year just for us!

with the support from: