“Love is all that I want, and I find it there in your arms. Isn’t it hard to believe, we’re in heaven…”

I glance sideways at Eivind and roll my eyes as Bryan Adams is blasting through the speakers. We’re cozing in the car a little longer before heading out into the cold. Snøvasskjerdingan is looming somewhere above us but the moonless sky leaves us guessing where exactly. Our alpine start might’ve been a bit too alpine and we’re trying to avoid arriving at the base in the dark. 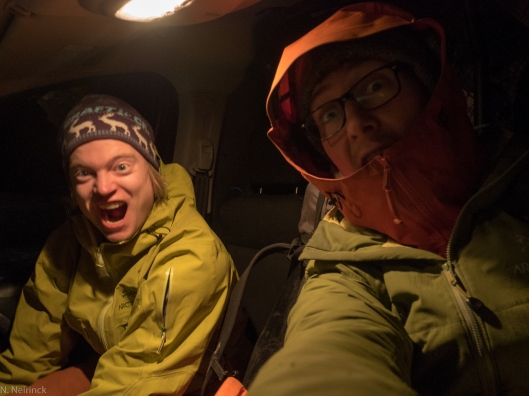 That morning, stoke measured quite above average

It wouldn’t be Sunndalen (or Drivdalen) if it didn’t involve some major bushwacking but we manage to end up under the diamond face, heading towards the big couloir that leads to the heart of the mountain. We make our way up in good time and when the first light hits it  allows us to have a closer look at the greyscale mountain.

Our initial idea was to start up the “Ad høyre” line (see picture at bottom) and try and make an upwards traverse into the big couloir. For that we brought a trad rack and a pair of rock shoes, in case we had to bust out some Caldwell moves mid-diamond. However, looking up we see that the hammer, separating the upper and lower part of the big couloir, has ice on it! Our last minute idea to bring more than five screws doesn’t seem so stupid anymore now. 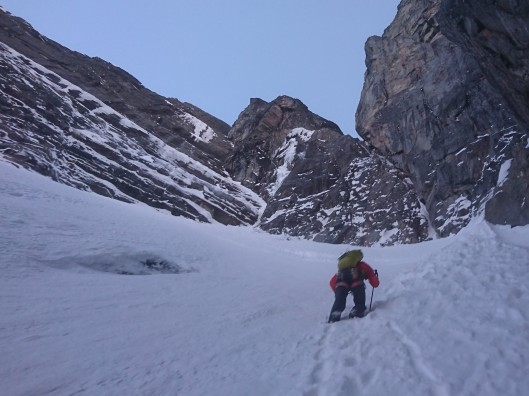 Nelson, happy he insisted on bringing more than 5 screws, walks up to the line

A burst of stoke fills the atmosphere as we realize our first ascent doesn’t necessarily have to involve Reticent wall like moves. The ice looks steep, thin and hard, but we both realize these conditions are a freak accident and we just have to give it our best shot! We slog towards the base and Eivind fires up an easy first pitch. I feel a lot of rope coming back, hear him smashing some peckers in and then follow up.

Arriving at the belay he tells me he already checked out the next pitch and tells me where to climb. I don’t think too much about that and give him the classic “I have climbed ice before you know”-look before I contemplate the surprisingly fragile ice. Eivind says something about this being real cham-like alpine ice and I tell him cham-ice sure is more solid than this shit, then carefully make my way up. Eivind keeps asking if my axes stick. I tell them they stick. Then I tell him to shut up and let me focus. Then I continue to climb. 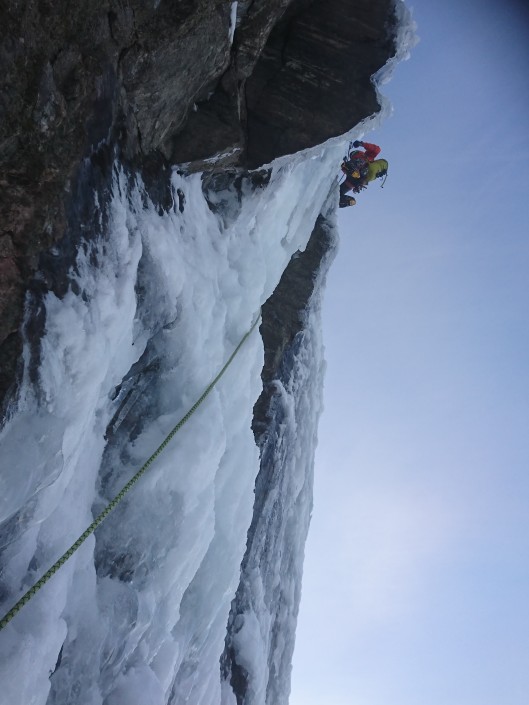 Out of reach of Eivinds questions and him filming some snippets (am I even on belay?) the dinnerplating is real and I breath heavily as I try to convince my forearms there is no such thing as pump. I find the little roof I saw from the bottom and happy to get a breather I take some time to make a bomber belay. All hail to peckers. Less hail to nomics that don’t have a hammer. But it works. I’m glad Eivind takes some time seconding and when he congratulates me with the lead I pretend it was no biggie. 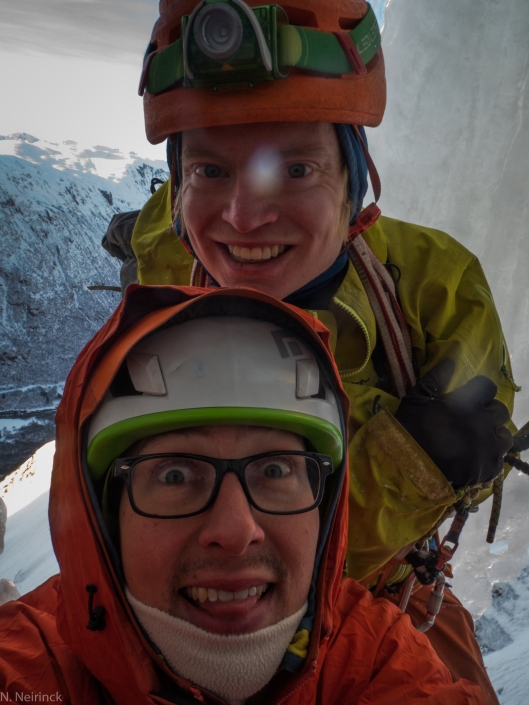 Now he is climbing above me.. As I slowly start freezing in my uncomfortable little ice cave I start wondering how hard his pitch is. He takes forever. I wonder if I’ll ever get feeling in my legs again. I wonder if the route will go. Just as my thoughts start dwelling of to why I like this kinda stuff again I feel the rope feed out fast and I realize he made it. And that both my legs are asleep, that I realize too. 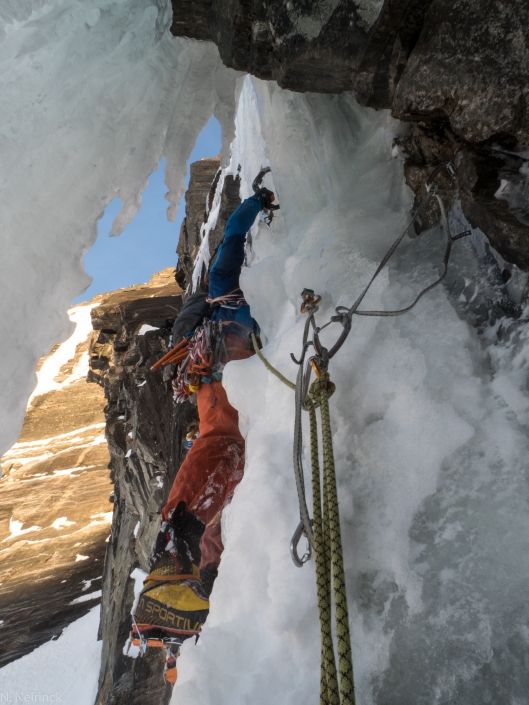 Eivind climbing out from under the roof, firing up the second pitch

The sun is shining on my back as I climb out of the cave onto dead-vertical ice. Following Eivinds path of least resistance, carefully using the holes he left, pumped out of my mind, I forget my half hypothermic body. Though steeper, the ice is better here. Fighting to get the spectre out (we bought it the night before) I understand it took some time to climb this pitch. The line isn’t that tall, but the giant buttresses of Snovasskjerdingan shooting down from the sky add a great deal to the exposure and make you feel “out there”. 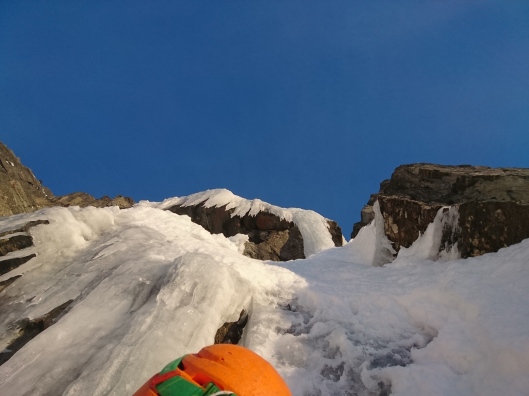 Looking up the ice on the second pitch

Working hard I make it through the difficulties, climb up to Eivind and jokingly tell him he should get his head checked. Eivind says the same about me. Apparently he tried to start up my pitch but soon decided he’d leave that shit to the Belgian. Funny how things worked out like that. 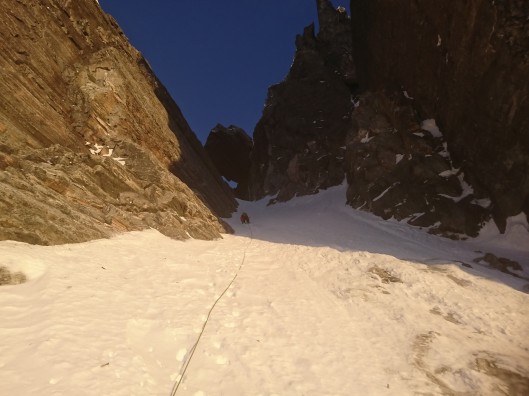 Joakim described the chockstone as “container sized”, however, the vast rock that got itself stuck between the steep walls of the couloir looms over us like a giant meteorite straight out of a star trek scene. Wading up through the snow underneath it takes about ten minutes and makes me feel insignificant, yet present. “Suspense” gets a new meaning. 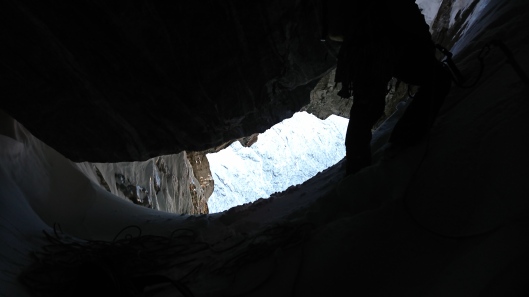 In the cave about to blast some mixed moves

The chockstone houses a cozy cave where a few meters of delicate, yet fun, mixed climbing takes you to a smear of ice that marks the end of the difficulties. I let out a satisfied shriek as I look up at the last bit of snow couloir leading to the top. 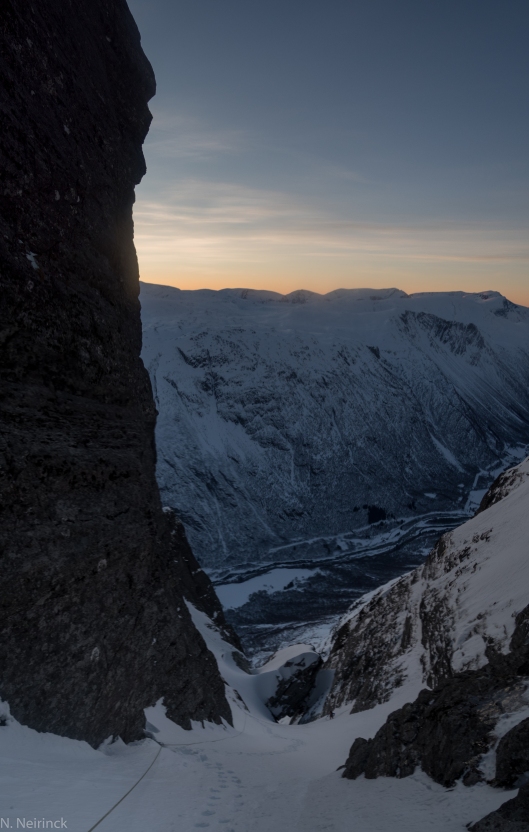 The upper couloir, snowcovered chockstone below

“That was pretty casual” Eivind says as we both stare at the couloir below us, our surroundings, each other, somewhat stunned by our accomplishment. We hug each other and hike up to the summit where we look down into Sunndalen, with the amazing sunset firing up the sky. “Fuck worrying about money” I say, “This is so much better”. I try and take in every detail of the amazing view, every bit of emotion that led to this climb and was caused by it, before we head to the return couloir and decide to ‘casually’ butt-slide 1500 altitude meters down.

Eivind looking out towards Sunndalsøra

During the writing of this report we look for a good toppo-foto of the line. After studying pictures and Norgeskart in depth we find out that instead of climbing the “diamond line” we have climbed straight up at an intersection, undoubtedly attracted by the gravity of the chockstone that sits in the couloir to the left. Even though we didn’t climb the big central couloir (which we initially thought we did) it still was an awesome day out and at least now its been proven possible to reach a point were one can attempt the diamond line. 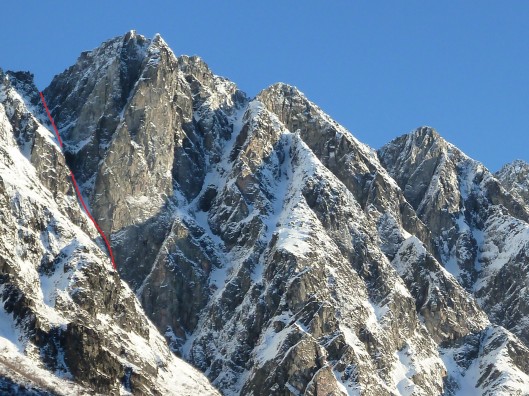 A big thanks to Joakim G. Eide for delivering the stoke for the massif and giving great beta. Conditions on the mountain are great at the moment, and we hope others won’t leave the chance for a second ascent soon. Go get after it! 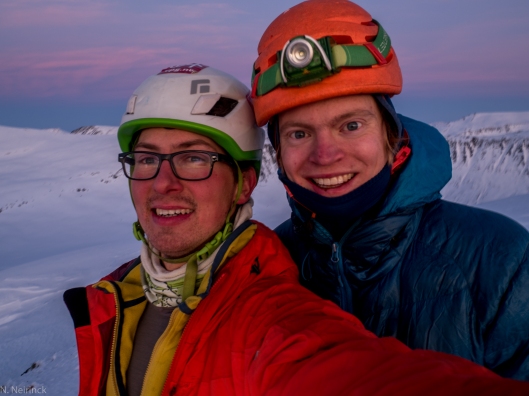 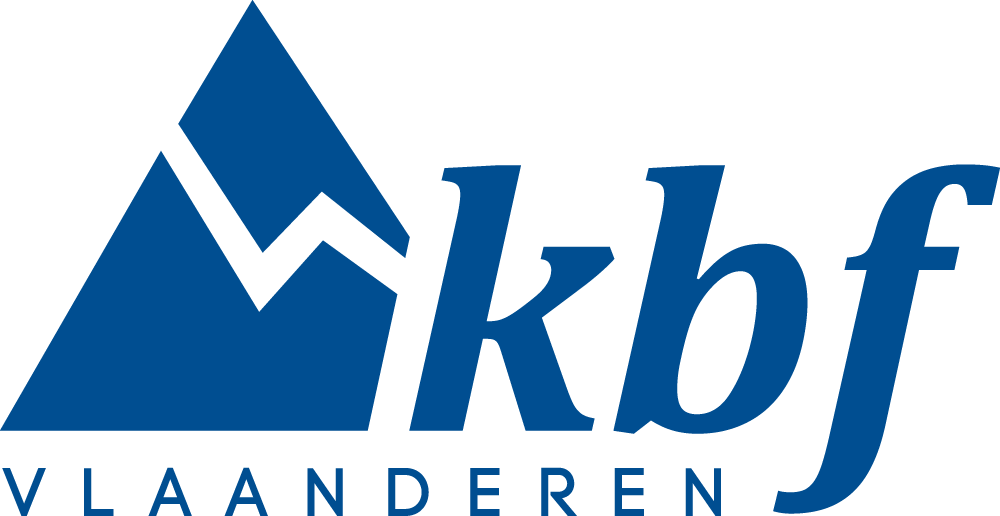